A Day in Beaucaire

We get up early to take advantage of the morning coolness and take a stroll along the top of the stone dike in front of the apartment, looking over the river Rhône. It's a short walk to the foot of the castle where the dike ends, and now it's time to go back and cross La Place Vieille to the nearest Boulangerie. One or two people are sitting having coffee in the square, but the streets are still quiet and empty. I buy some croissants and a freshly baked French loaf, or baguette.

We sit out on the terrace and relax over breakfast. The chant of the cicadas starts up in the trees and we realize it's time to get moving. What shall we do today? Shall we drive to Arles and see an exhibit, or shall we just stick around Beaucaire? It's market day, so we decide to go to the market first and then decide.

The little square in front of the Hôtel de Ville is filled with stalls shaded by umbrellas, and crowded with shoppers. Pretty young mothers with their children and older women with wicker shopping baskets walk slowly among the stalls, looking carefully at the mountains of melons and peaches at the fruit stalls, the sausages and pâtés at the charcuterie stall, and all the other foods on display. At the Café across from the market, with its photos of famous Taureaux (bulls) on the walls, old men sit over the first beer or Pastis of the day and argue about sports. A line of young men lounge against the wall of the Hôtel de Ville, solemnly watching all that goes on in the market but saying nothing. We head straight for my favorite, the olive stall. Here are all kinds of olives, green, black, plain, mixed with garlic and pimento or with basil. There are several kinds of tapenade, olive spread, anchoiade, anchovy spread and caviare d' aubergines, made from eggplants. The stall keepers at the market are good natured, chatty and patient with our broken French. After our shopping, we walk home, loaded with good things.

We decide to visit Le Mas Gallo-Romain des Tourelles, a working reconstruction of a Roman winery, on the outskirts of town. Beaucaire, known in Roman times as Ugernum, was one of the cities in a Roman administrative region set up in 118 BC that roughly corresponds to today's Provence and Languedoc. In about 120 BC, the Romans built the Via Domitia, a paved road that ran all the way from northern Italy, across the Alps and through southern France, passing through Beaucaire and Nîmes and finally ending in Spain. The section in our area is one of the best preserved and you can still see some of the road's stone posts that marked the distance from Nîmes (bornes miliaires) in the northwest part of Beaucaire.

The winery, in a lovely, shady farmhouse that has been in the same family since 1726, is on the site of a Roman vineyard and the remains of an amphora workshop are still visible among the vines and olive trees. We wander through the exhibits in the farmhouse, which give glimpses both of Gallo-Roman times and of 18th century rural life.

Then we visit the main attraction, the reconstruction of a Roman wine cellar in full working order. There is a large stone tank where slaves would trample the grapes with their bare feet. The juice flows out through outlets covered by a wooden filter into a shallower tank. 50% of the juice was collected this way, and then it was time for the second pressing. The trampled grapes were loaded into a large, square wooden container with slats to let the juice run through. Wooden blocks were piled on top, and the press, an enormous wooden beam the size of a battering ram, was lowered onto the container with the help of winches and a lot of manpower. It was hard labor indeed. Even trampling grapes with your feet is only fun for five minutes, apparently, according to those who have done it. The grape juice was stored in giant amphorae half-buried in the earth to keep them cool, and fermented for 15 days. Finally the brew was mixed with various spices, honey and a dash of salt water in some cases, to produce quite a variety of drinks.

I know all this because as well as marveling at this impressive equipment, we are shown a movie that demonstrates it in action. On the second Sunday of September every year, a group of young people makes wine the traditional way, according to detailed methods and recipes provided by such Roman writers as Pliny, Cato and others. The Mas produces 10,000 bottles of Roman wines a year, as well as more familiar "Costières de Nîmes" red and rosé wines.

At the end of our visit, we spend some time sampling all the wines from Roman to rosé, assisted by a knowledgeable and enthusiastic young girl of the Mas. The Roman wines are strange but interesting and we buy a bottle of Mulsum, flavored with honey, which makes a good aperitif. However, I have become addicted to the local rosé, so we buy a bottle of that also. It is a wine I never drink at home, but here it seems the perfect thing - light and refreshing in the summer heat and a good accompaniment to Provençal food. 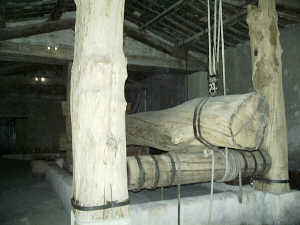 Later in the cool of the evening, we wander over to the canal for a Pastis at one of the outdoor cafés. It is pleasant sitting here, enjoying the slight breeze coming from the water and watching couples and families stroll by. We crown our day with a superb, leisurely meal at one of the restaurants along the Canal, at an outdoor table. Dusk falls around 10 o'clock and we walk home through Beaucaire's narrow, medieval streets around 11 o'clock, through the Old Square where small groups of people linger over drinks.

It has been a wonderful, lazy day pottering about our town. The Roman ruins have fired my imagination and I think about revisiting all the nearby Roman sites, one by one, such as Arles, Nîmes, Glanum in Saint Rémy, and a little further away, Orange, with its imposing Roman theater, still in use for operas and drama. Barney, on the other hand was inspired by the wine and suggests some more wine-tasting excursions, starting with the Luberon and visiting some of the beautiful mountain villages along the way. So much to do and see… we'll think about it tomorrow.