A Short History of Beaucaire 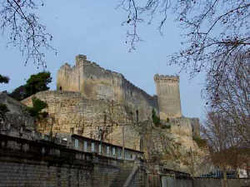 Chateau of Beaucaire
From Wikipedia:

In Roman times, Beaucaire was along the Via Domitia, the first Roman road built in Gaul. During the Albigensian Crusade, Raymond VI of Toulouse besieged Beaucaire in May 1216. The efforts of Simon de Montfort to relieve the town were repulsed. The city fell after a three month siege.

At the end of the Hundred Years War in 1453, Charles VII of France declared that Beaucaire would become the site of the Foire de la Madeleine, a commercial fair that would enable the trade of goods from all of the Mediterranean Basin countries to all of France. By the mid seventeenth century, the Fair was the largest commercial fair in the Mediterranean region, exceeding in six days the total volume of trade done in Marseilles in a year. It remained the dominant Mediterranean trade fair until the arrival of the railroad in the mid nineteenth century and because Napoleon removed its tax-free status. One result of these years of commercial dominance was the construction of a remarkable number of architecturally significant mansions and palaces by rich merchants of many nationalities. Click here for a video history of the Beaucaire Fair (in French). 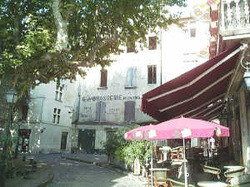 La Place Vieille
Beaucaire's handsome stone townhouses and public buildings, such as the 15th century Eglise St Paul, the stately Hôtel de Ville built in 1683 and the imposing Baroque church, Notre Dame des Pommiers (Our Lady of the Apple Trees), built to accommodate the hordes of people who attended the annual fair, give clues to the town's former importance. The people of Beaucaire still have a great sense of civic pride and a love of the arts. They glory in the fact that Daudet and Mistral wrote about Beaucaire, for instance. La Place Vieille, a lovely tree-shaded square around the corner from our apartment is also known as La Place des Arts, since craftsmen of all kinds have been encouraged to move there.

Other sights on the outskirts of Beaucaire include the 5th century Abbaye Troglodytique de Saint-Roman de l’Aiguille, a series of hermit cells and chapels carved out of the rock on a promontory high above the Rhône, unique of its kind in all of Western Europe. The panoramic view from the top is stunning, looking out over the bend of the Rhône and two dams far below.

The Mas Gallo Romain des Tourelles is a functioning reconstruction of a Gallo-Roman winery on the actual site where wine was made 2000 years ago. Here you can discover and taste the secrets of Roman wine, flavored with honey and spices. On the second Sunday of September every year, a group of young people make wine the traditional way, trampling the grapes with their feet and then using a gigantic wooden press, which take several people to operate. They produce about 10,000 bottles a year and sell it on site.

And take a look at "The Insider's Guide to Beaucaire" by blogger Angela Billows.And click here to read about spending a Day in Beaucaire. 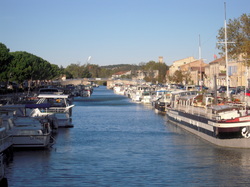 The quiet streets and squares of the old town are in contrast to the lively canal marina known as "Le Port de Plaisance ", jammed with pleasure boats owned by visitors to the south of France from around the world. Small restaurants line the quays and people sit over a coffee or Pastis to watch the world go by. In addition to the regular twice-weekly markets, the quays come alive on Fridays in July and August, when they are transformed into one big party, decked out with arts and crafts stalls, live music outside the restaurants and wandering performers. Yet there are few tourists and it feels like a big Provence family affair, with children darting among the restaurant tables and friends stopping to greet each other as they saunter along.

You can also rent canal boats for a day, a few days or weeks to travel along the canal through the heart of the Camargue, no pilot's license required. Beaucaire is an ideal departure base for those who have never driven a boat before as there are few locks and no current Click here for a video tour of the port. 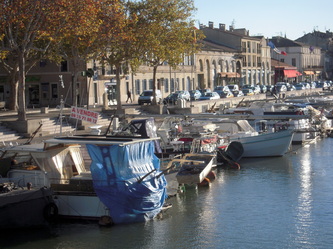 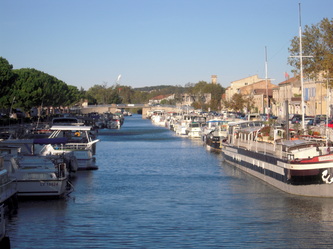 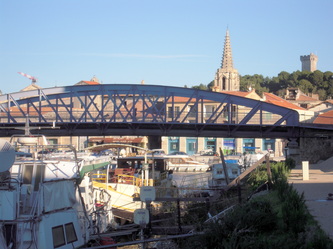 Beaucaire's Foire de la Madeleine and the Cult of the Taureaux 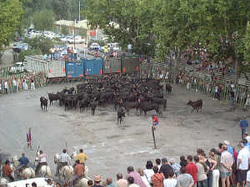 Unleashing of the "100 Taureaux"
The famous Foire de la Madeleine (Madeleine Fair) first took place in 1217 along the banks of the river. It became an annual event, and by the 17th century it was the largest in France. At its peak, over 300,000 traders and visitors would attend, coming from all over Europe and even the Middle East. Today the fair has been revived as an annual week-long festival in July, featuring a grand parade followed by a free event in Les Arènes (the bull ring), a fun fair, markets, music performances around town and a series of events involving horses and Taureaux (bulls). The pièce de resistance is "Les 100 Taureaux" when 100 bulls stampede through the streets. Run with them if you dare, or watch from the safety of our apartment, as they pass directly below.

The Cult of the Taureaux is very important here, as in other nearby towns such as Arles and NÎmes. If you are not prepared to watch a bull fight, try one of the other events, such as an Abrivado, where horsemen (and women) corral a herd of Taureaux, or Courses Camarguaises, where men run to snatch various talismans from the horns of a Taureau. Definitely still dangerous, but not deadly. 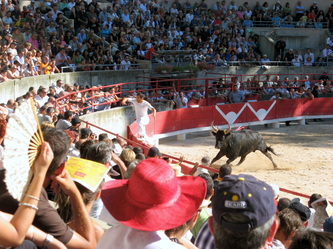 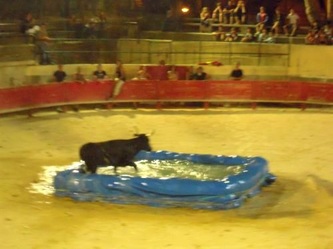 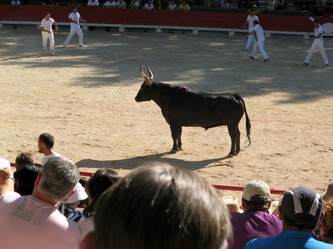